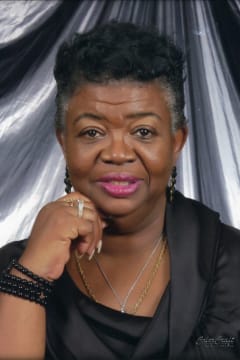 Myrtis Mae Linson Parnell made her transition from earth to heaven on September 4, 2021, at the age of 71. She was born August 19, 1950, the first born to Lue Rannie Hotzclaw and J.D. Linson of LaFayette, Alabama.

Myrtis confessed Christ at an early age and was baptized by Pastor Thomas at Mt. Zion Baptist Church in LaFayette, Alabama. She later moved to Birmingham along with her mother and 7 siblings where they joined Six Street Peace Baptist Church under the leadership of Pastor Hobdy Moorer and her ﬁnal church home, First Ebenezer Baptist Church where she faithfully served as church secretary for many years.

“If your actions inspire others to dream more, learn more, do more and become more, you are a Leader.”
Myrtis was educated in the Jefferson County School System and graduated from New Castle High School with honors. She later attended Lawson State Community College and Wallace State College. Myrtis was very intelligent, a great conversationalist and historian who was kind with sharing her knowledge with her children, work and military colleagues. Her leadership skills were evident and central to her roles throughout her professional and military careers. Myrtis began her career in communications at South Central Bell starting in 1972 and rose to supervisory level in Customer Service at BellSouth and later AT&T where she retired in 1999. Never one to rest or be idle, Myrtis returned to the workplace and joined T-Mobile in 2001 as a part time Customer Service Representative. It didn’t take long before Myrtis’ God given talents kicked in and she was promoted to Customer Service Manager where she would receive numerous awards and be honored annually during the company’s top performers gala. She retired for a second time from T-Mobile in 2012 and spent her final years working as a volunteer. Her volunteerism began at Positive Maturity where Myrtis was a “Foster Grandparent” a role that allowed her to fulfill her passion for children and mentoring the many young, professional men and women who fondly called her “Mom,” “GrandMa” or “Mrs. P.”

Myrtis was a member of the Birmingham Chapter of Charms, Inc. a national social, civic, and cultural organization established in 1952.

“Be All You Can Be”
Many of Myrtis’ most cherished memories involved her other family, her Army Family. Myrtis joined the United States Army in 1978 and faithfully served in the 5th Medical Group and 75th Medical Hospital units. Her many Army adventures allowed her to cross paths with fellow soldiers who would become part of our lifelong family, as well as aunts and uncles to her children. Anyone who knows Myrtis will tell you how she loved her time in the Army and USAR, and the opportunity to serve her country even when she was called up for the assignment of her life. On December 27,1990 SSG Myrtis Linson Parnell was deployed to Saudi Arabia for Operation Desert Shield/ Desert Storm with the 251st Evac Hospital. Myrtis was in what’s deemed the military city, selected for a government hospital for the Allied Forces and ran the emergency room while managing the evacuation of soldiers. This was a fast-paced assignment with long hours working in the dessert for 12 or more hours daily. Her command ended when she returned home to a hero’s welcome on May 6, 1991, and was celebrated for her faithful time served on the front lines. Myrtis was honorably discharged from the United States Army on June 27, 1997, after 19 years of service.

“Do not be discouraged, for the Lord your God will be with you wherever you go.” - Joshua 1:9

Click a candle below to add a candle to your message.